Although widely used, the questions/question types are not something that children regularly encounter nor are they taught. Many independent schools use Cognitive Ability Tests (CATs) as an integral part of their entrance assessments.   Many comprehensive schools use Cognitive Ability Tests (CATs) within weeks of starting school to assess children and place them in sets according to their ability.

Can you practice for Cognitive Ability Tests (CATs) and improve your score?  Absolutely.

By playing Cognosis, children can familiarise themselves with Cognitive Ability Test (CAT Test) question types. This will make them feel more confident when they sit the tests and so obtain the best result for them.

Most children that are similar in terms of their social and educational background will tend to obtain similar test scores.  In the example below you can see that the average raw score from a test out of 40 was 31.  So, a child scoring 31 would be considered to be in the 50th percentile i.e. 50% of the children would have a lower score. If someone is described as being at the 90th percentile then that means 90% of the other candidates obtained a lower score. Or to look at it another way, that person is in the ‘top’ 10% of people who took the test. 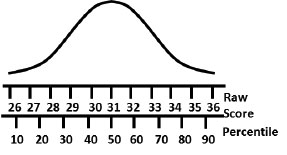 1.  A small improvement in a child’s ability to answer Cognitive Ability Test (CAT) type questions can make a big difference to the percentile of the population they fall in.  The higher the percentile they achieve the better their chance of securing a place at their chosen school or a better “set” or a scholarship;

2.  You can significantly improve your scores in Cognitive Ability Tests (CATs) by practicing the types of question that you will face.